With the animals and birds still staying hidden It seems I am having abit of luck or not lately running into wildlife crime rather than local wildlife this year, as a few weeks ago I had another encounter with a suspicious individual. While out taking a walk with my DLSR camera on a Sunday morning a few weeks ago we spotted a suspicious looking individual with an air rifle and a black staffordshire bull terrier (not concerned about the dog) walking the local canal tow path with an air rifle out and loaded which is illegal.
As it was quite misty and I only had my small lens on my camera I could only get a few far shots but you can see he has he gun up and aiming at something, just as a flock of Geese flew by. 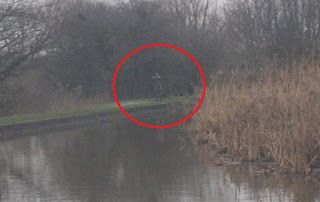 As I know the law regarding fire arms and the public I decided to see what this individual was up to before I phoned the police. As I was worried about local wildlife and have seen the devastation a person with an air rifle can do if there not stopped. Below is the video I recorded on my DSLR camera, I recorded just encase the man got violent or tried to change his story of the behavior or action he took when I asked what he was doing. At one point he tried to make out I was a homosexual to try and knock me down but this had no effect on me as the last person he used an insult like that was my young nephew "A child" said so for a grown adult to be so immature was quite shocking.

I decided to phone the police as I was worried about the local wildlife and people using the tow path. I find that when these people are committing these illegal actions they know they are doing wrong and the only thing they can do is bully and threaten when somebody asks them what there up to. I reported to the police with a description and the evidence I collected and hopefully with local people keeping an eye out plus all the social media sharing that's been done will make sure this individual and others like him are reported and stopped from injuring and killing wildlife that they see fit to kill. I know who the individual is as I have seen him fishing locally where he leaves his empty beer cans, we don't know his name for sure yet but nearby to where he was taking pot shots into a river where are otters have been filmed we found a camp fire. In the fire was a bill for rent arrears with an address and a name so for now I will be keeping an eye out for this individual to make sure he keeps away from any where wildlife is vulnerable. I now have a case with the police for this report so if your a local from Middlewich in Cheshire and you know who the guy is then let me know, I've often seen him with his dog fishing near the Town bridge close to the doctors usually drinking alcohol and leaving lots of litter behind.

Here's some advice on UK gun laws and how to report http://birdersagainst.org/air-rifles-and-the-law
I have received lots of support and some people have said be careful as they could get violent or leave it to the police but my thoughts that if these individuals committing these crimes think the general public are not watching or are not going to stand up to them and defend the Nature then they will continue to kill and injure wildlife illegally. I believe we have to nip these things in the bud straight away before real damage is done. One day they will be shooting at something floating in the river the next day a duck then a swan then an Otter. For me once something has been killed then it's to late as the damage has been done and if I did nothing to try and stop it from happening I would not be able to forgive myself. So call me a fool or a crazy I'm not the one with a fire arm in a public place where people go to relax less than a few minutes away from residential areas.

Thank you for reading and if you see or think wildlife crime is going on get in touch and will help with all the advice I can.