One cold afternoon last week me and my brother set off towards some farmland near Davenam, Cheshire. We went to the area to see if there were any tagged Swans on the flooded fields in the area. There were about 7 Swans and a few were ringed which took a while to read the tagged due to them grazing in long grass. On the way back we saw a large group of Starlings gathered in huge groups in the tops of some trees but as we had to get back before it got we had to leave quite quickly.
Moonlit Murmaration 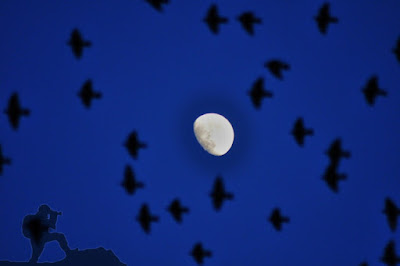 On the way back along the canal a bird flew past with a white belly and dark back. As we normally see Kingfishers zipping by we first assumed it was a Kingfisher but after seeing the colors and hearing the whistle we realized it was a Dipper. We checked a few days later, but we saw nothing I'm thinking it must have been pushed off its own territory in search of food in shallower water due to the streams up in the mountains flooding making it impossible for Dippers to feed in the fast flowing water.
On one of the wet and windy Dipper search days I was waiting to meet someone on the edge of Middlewich town near Croxton Recycling center. I was just about to cross the bridge over the river to return home when a man on a bicycle appeared and straight away my gut told me he was a hunter or poacher of some kind. Although hunting is not illegal, there are strict laws where you can hunt, what you can hunt and gun laws so to be sure I always keep any eye out. As soon as he new I clocked him he got off his bike, lit a cigarette and walked over with his bike. The first thing he said to me was are you checking your snares as I had my small camera bag on my shoulder with my dinner and flask in. I said no and told him I am a wildlife photographer who watches out for and reports wildlife crimes in the local area. We had a few conversations and awkward silences but my first thoughts were right as he started spilling lots of things about poaching. There was no aggression from me or him and I foundout a few things about how and when he poaches. He got abit cocky and said that I was going to report him anyway so I might as well see his ID which I never asked for but what he showed me next was hard not to react to but I managed to stay calm. He told me he was after a Male Mallard off the canal to eat I said how was he going to get one he said he had a net and then from his shoulder bag he pulled out an air pistol in public while there were dog walkers 20metres away. So I have a description a name and other evidence plus I asked him about another local poacher we have been keeping an eye on and he confirmed his involvement in poaching. I have reported and put out out an alert on social media to local Middlewich people to keep an eye out for him and if they see him report it to me through social media so I can report direct to the Police, CRT and Environment agency. Here's a quick description of the gentlemen he was in his 50's, glasses, 170cm he had an electric bike with a built in bike stand. He was wearing camouflage trousers, blue striped coat. His fishing net was carried in a blue long and thin pole bag on his back and his air pistol was in a burlap shoulder bag like the one below. 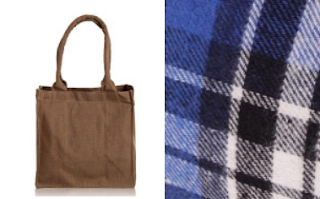 With local Joggers, walkers, dog walkers, cyclists and boaters informed I am hoping this will be the last encounter with this individual as I am hoping I may have scared him off from trying anything in this part of Middlewich as I made it quite clear that he knows there are many people looking after the area. 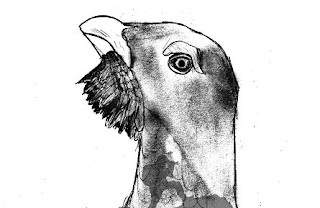