As we walk up and down the canals photographing wildlife we bump into dog walkers and fisherman and they gave us the information we needed. A fisherman showed us a video of Flash stamping on top of the dead swans body as if to still be trying to drown the Swan and asserting his authority on his territory. That lead me to the theory of a Young Swan probably a 2 year old coming into there territory and being met by 2 adults defending there territory and there Cygnets so the yearling stood no chance. My theory was backed up when talking to a gentle man who I used to chat to when I had my boat moored up on the canal he said a battle broke out when another Swan came into the area and F & S chased the intruder away then possibly it was drowned by the pair due to it not leaving the area it may seem harsh but that's nature right on our doorstep. While they fought the intruder the 7 were left alone and after that I have no clue what happened and as we only found out this information a few days after but why had snow left the family and where was she. 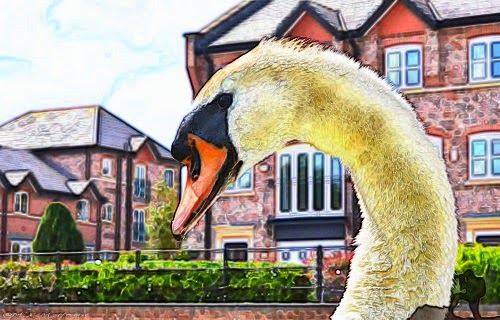 After finishing work I took my dinner to check there usual grazing areas by the river and canal but just when I thought she must have died or been injured in the fight and being rescued by an RSPCA officer there was abit of hope. When I looked down from the canal aqueduct down onto the river Dane I could sight of Swan with no rings on it's legs and in good health. I dropped my dinner down onto the sandy bank where she sat and she ate it all "Cheese and Onion pasty plus iced buns" very good signs it could be her but I still could not be sure that it was Snow. 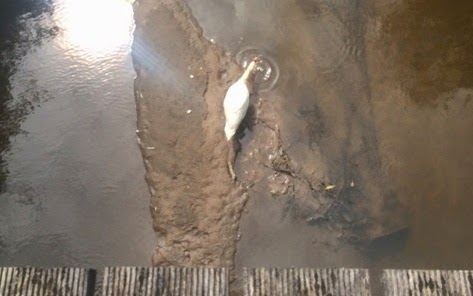 Later that day we popped back to get closer and on her level to see if she would come out of the water to us and she did. 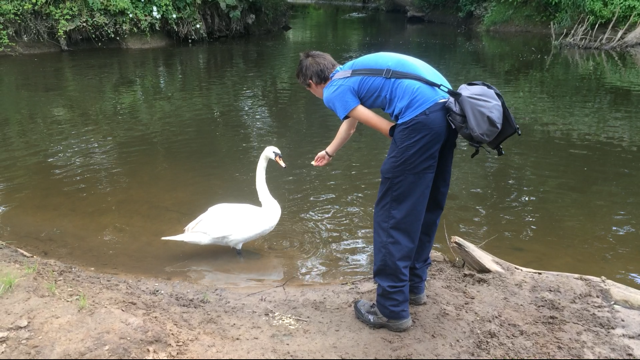 She was nervous and hissy which is Snows normal attitude and no other Swan would be this confident on my local patch so 99.9% positive it was Snow. But this raised another question of why had she left Flash to raise the the magnificent 7 by himself and why was she hiding on the river?
More tomorrow on the tale of Flash, Snow and there possible DIVORCE