Just as I was getting ready for Spring again!!! and the evil white stuff returning some of the spring signs I spotted a few days ago have been really affected by the sudden blizzards. The Swans and garden birds starting nesting and in a local pond, the Frogs began mating and then it came back the mini beast from the east or something I heard it being called. As we went to Macclesfield Forest and into the hills of the Peak district the day before it was nice to see the snow there but also to enjoy the views on my local patch on a day off rather than having to rush off to work where normally by the time I normally finish the snow has normally melted. By the time I returned home after a few hours taking photographs in the snow I was happy to have made the effort to get up early as by 10am it was all gone but I got a few photographs of my favourite local wildlife places.
From the back of Macclesfield forest

The birds were really struggling to fly in the winds coming down from the hills we were hiking the day before. I saw a few victims of the storm a Fieldfare with a damaged wing and a crow were two I have seen them disappearing into vegetation on foot rather than flying but as they are quite responsive and feeding themselves so it's up to nature whether they survive. The only time I get involved is if something has been injured or affected by man-made causes. If the birds are injured by the elements so their loss of life may be the fuel to help another creature or creatures survive the harsh weather.
Frog Spawn on the local pond was covered in slushy ice 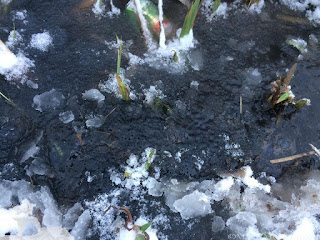 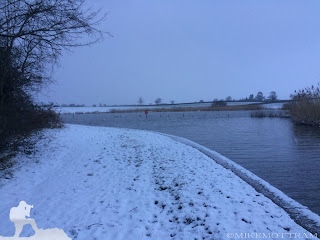 On the way back home for breakfast in bed 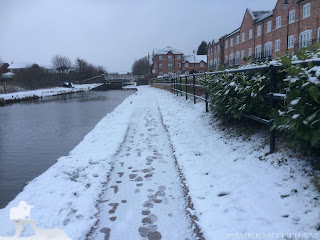 The Daffodils look sorry for themselves under the heavy snow 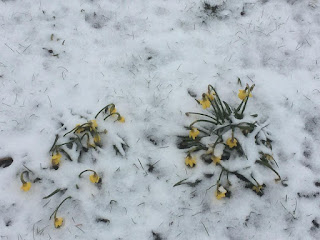 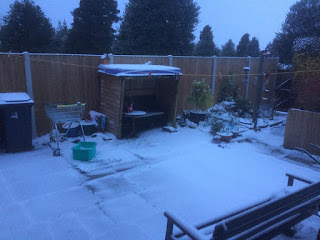 In my garden last week we had a Blackbird, Robin, and Blue tit nest building and since the snow returned they have all disappeared but as it took me a few days to find the time to write this blog after deleting the 1st draft. The garden is now returning to birds nesting central the wild Garlic is shooting up as well as the balsam and bluebells which I can't wait to see them flowering in the coming weeks.
I hope to be adding a few more feeders, table plus a bird box to my new Wildlife observation area in the next week or two so I'll keep you updated on the first species to visit the area as the habitats are so varied so I'm hoping the species will be to.
The Toad breeding migration will begin in a few weeks and the Otters may show up to feed to 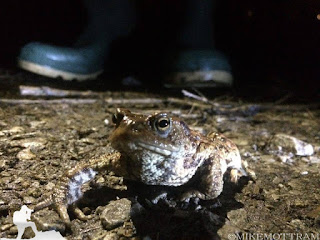 Just a quick note to say I have just received my Falcon bivi camouflage hide which I'll be using on my first Spring trip to Wales after Easter and I will be trialing and reviewing for Go wildlife watching next week so keep an eye out for that as after opening today the weight and portability are making this look like a promising 2018 product for wildlife photographers and wildlife watchers.