Overnight trip to the coast

I headed to North Wales last weekend for a lone camping trip to clear my head and checkup on a few things I spotted on my last trip in June. As I had work on Friday morning I wanted to have all my gear packed and ready to go but luckily my boss let me have an early finish at 10am which gave me a great head start on the 5 buses I had to get to make my way to Llandudno. I new I would not get there till 3pm if I made all the connections and no buses broke down in the heat but luckily I got off one bus straight onto the next and I arrived at 3.20pm to a very busy promenade and I was so glad to get some fresh sea air. The nice thing about the buses in North Wales is every summer they get new buses and this time they were pretty modern called "Sapphire buses" they had plug and usb inputs which is perfect to charge any gear from phones to camera battery's. The most comfy part was the new cushioned seats and as I knew I was going to be camping in a very small tent near a cliff edge I thought I would make the most of the comfort while I could.
http://www.arrivasapphire.co.uk/a-new-way-to-travel
Luckily I got off the bus right next to the place where I wanted to visit first and that was the little Ormes beach on the North shore. I was under the Little orme crag on a quieter part of the beach I found a dodgy fishing net wrapped around rocks with 2 bottles on and there were 2 sharks in the net. I suspected this net was illegal as it was in a place where seals and sea birds hunt and as there still breeding nearby plus it could have been taken out by the tide and caused issues for cetaceans. I began to cut half the net out to remove and dispose of and let the sharks go. As I removed half of the net I spotted a foreign gentleman coming over with a large red tub. I asked the gentleman if they were his nets and he said no then I asked again and he said yes. I asked him to remove the as there not allowed to be used due to the harm they caused to wildlife he apologized many times and he took the nets and sharks with him and his wife helped. I also said I phoned the warden so he better take the nets and not return to the area to try again as I would be checking daily. He was obviously catching for his restaurant and I understand he's trying to make a living but we can't take that risk as the nets were so dodgy. If anyone is near the pool area and could check the area for nets every now and then to stop this illegal activity that can do so much harm to our North Wales wildlife. Sometimes a bluff is all it takes to stop this type of activity's but thanks to Facebook I have alerted the locals who are checking out the area each day to make sure that they are not put back. 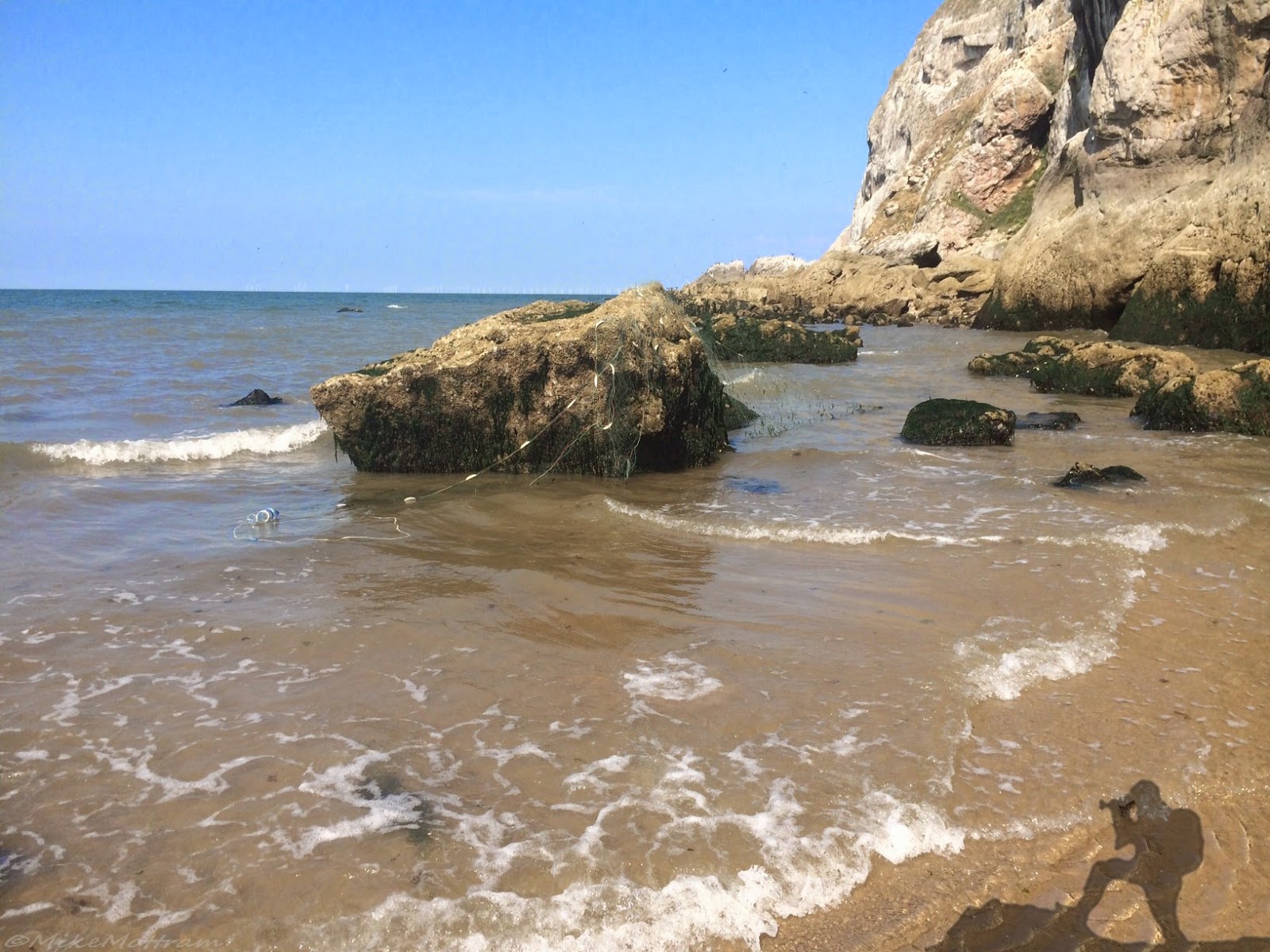 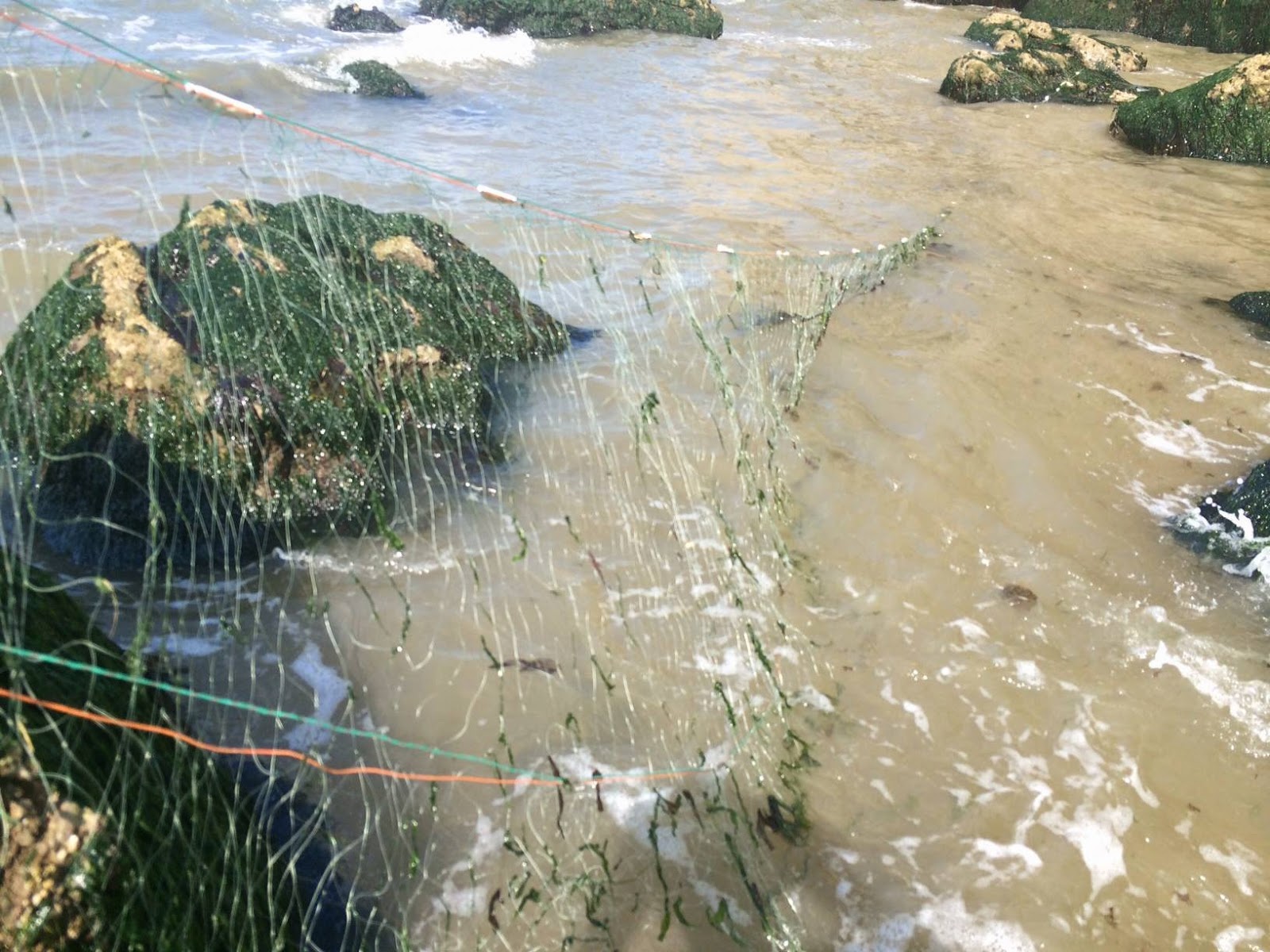 Photograph below is where the net was (red) and blue is the only access to beach. But if anybody is friends with the person whose house over looks the beach below then you ask permission to use there land as there is a donkey field next door which looks right down over where the nets were place and this takes away any danger and gives a safe location to use binoculars or a zoom lens to gather evidence plus takes away the long walk down the rocky beach.

What constitutes ‘Illegal Netting’Well, a whole list of things including:- Netting with the intention of selling the catch from an unlicensed powered vessel.- Using mesh sizes less than byelaws allow- Taking undersized fish- Taking fish in excess of bycatch allowance for which quota is not held- Taking migratory fish such as salmon and trout (and eels) without a special licence- Netting where fishing is restricted, maybe at certain times of the year- Using a fixed net when and where no enabling byelaw exists- Not having properly marked nets, fishing nets unattended, not having the correct depth of water above the headline at all states
of the tide, all according to local byelaws.- Not having pingers attached to prevent cetacean entanglement where this is a requirement

I don't have much faith in authority's in this day and age and I've become the sort of person who sorts things out themselves directly and community action is a better way to sort things out by forming small groups to keep an eye on places like my Badger group does and it works. In this case the best action is a small group to check there every so often and gather more evidence if they carry on doing this. They can only put out nets and retrieve at low tides so gives a small window of when the area would need to be checked. I have reported issues like this before and nothing as been done to police, wardens and those who manage the prom. Direct community action is best and some sort of patrol would be a great way to keep an eye on the area. I will mention to the stones to sand Llandudno beach group as most people are local and they can keep an eye out on the beach, I am not saying to directly apprehend this person but take photos and film is needed to take matters further. As I don't live there I can't put much time into it so leaving in the community's hands is all I can do. I will check area when I'm back in September as I have no problem apprehending somebody for doing something wrong as these people are quite ashamed and often walk away and never return.

Mike
Panorama of the beach at sunrise