Well, I thought this time would not come so fast but as I have just had my last and fourth week of this year's Spring/Summer Wild camping holiday season. Our wild camping trip began with our heavy looking bags on our bus trip which began with rain and a bus diversion. We started on Saturday at Cowny with a walk to see if there were any Oystercatchers nesting on the cliffs but no luck so had some sunbathing while waiting for night to come so we could go to our secret wild camping location. 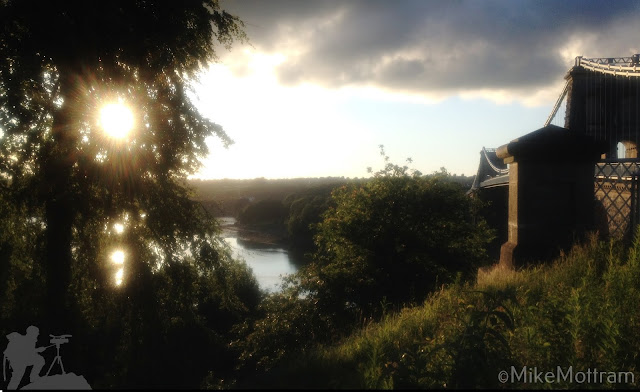 As soon as I walk over the bridge I forget everything and start to become to the person I have to bury away in normal working life as I feel so free and stress-free knowing I'm in the elements getting stronger and healthier as I adapt to being outdoors. My DD tarp kept the rain and wind off and plus made us more stealthy and hidden plus my mesh tent and golf umbrella kept the bugs away although when packing up each morning and leaving no trace I'd find a few earwigs trying to hitch a ride in my bag. 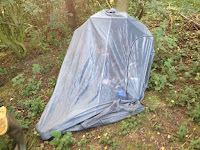 We set off early the next morning after the best nights sleep I have had wild anyway. We set off to our next location to visit which was Newborough as the sun was blazing and our journey was long.We ended up getting to our next rest location on the straits and at about 7am I made a cup of tea on my spirit stove. While waiting the tide went out to reveal some wonderful things nearby there was a large rocky area and under every rock, there was so much to see elvers (Young eel) and fish were left in small pools alongside there Crabby friends. 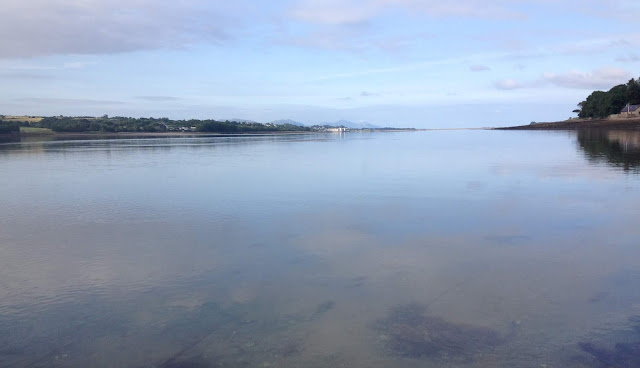 Large sandbanks prompted me to go explore them but while paddling through we found lots of Sand eels shoals which brought in the Terns to feed probably with young at a place I have wanted to visit for a while. 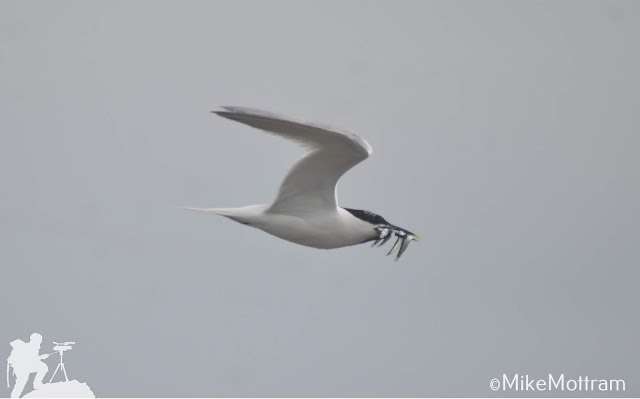 We spotted lots of small Lobsters and shrimps combing the sandy floor for food. The special thing we found was Hermit crabs probably heading into battle for a new home and some really had the odds against them so what we thought we would do is collect any Hermit crab shells pushed away by the higher tides out of the crabs reach and return them back to the strait where the crabs will use them. I think we found about 14 shells in good condition with no holes or damage to them. We left to get breakfast and head to the forest for some shade then relaxation on the dunes at Newborough so we had plenty of sunbathing where we saw three hooded crows but as the beach was packed with sun lovers I thought best to leave and hopefully may see later in the week which we did near Amlwch. 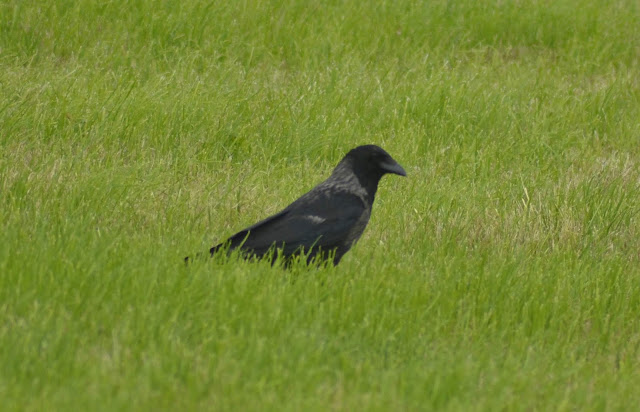 The sunset was gorgeous and I fell asleep just after and we woke up too late to catch a bus so we slept on the edge of the forest ready to get up early the next day but we slept in and had breakfast at Anglesey model village - http://www.angleseymodelvillage.co.uk/ which was very tasty and close to the forest plus the service was wonderful. Earlier in the week on our first day, I spotted a Kingfisher along the straits and a blonde tailed Red Squirrel and after 5 minutes of being up, it was quite wonderful and reminded me why I love Wild camping in a respectful way. I also spotted a pair of Common Sandpipers and as I have a new Tamron lens which I prefer compared to the more expensive lenses. One flew away but one remained to leave me with a quick chance while hidden behind a wooden post down on the side of the straits. I loved the green vegetation in the background as was a nice photograph to start the week. 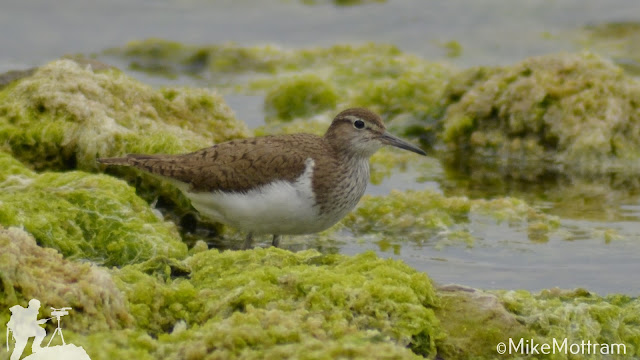 After leaving Newborough we returned to our original camping area with plans to go to Amlwch and walk from there to go caemes bay then onto Cemlyn bay to photograph the Terns there. There were plenty of Artic and Sandwich Terns feeding their chicks speedingly flying back and forth with food ranging from small fish to insects. We only had a couple of hours there so we stayed on the ridge and never went past the stone building which we found out had Little Owls in residence but at least we know for later in the year or next summer. 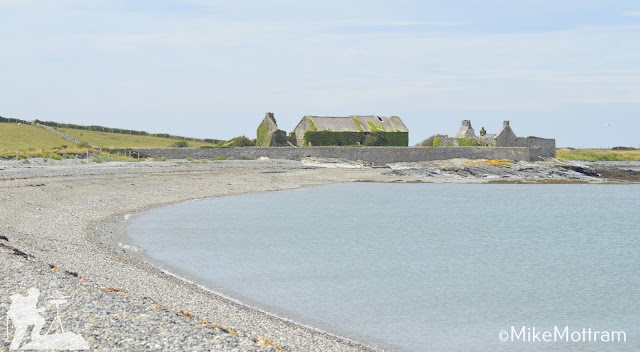 Beautiful colors as the adults landed on the hill to preen 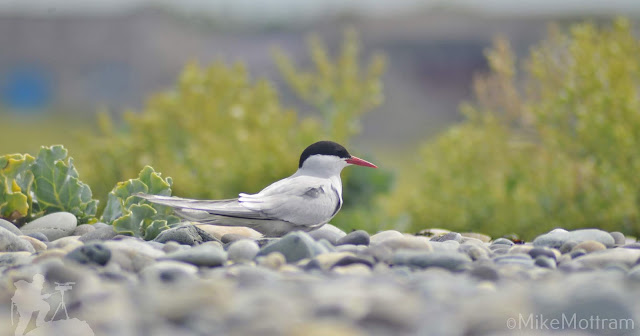 Calling for food as the chick sees its parents coming in 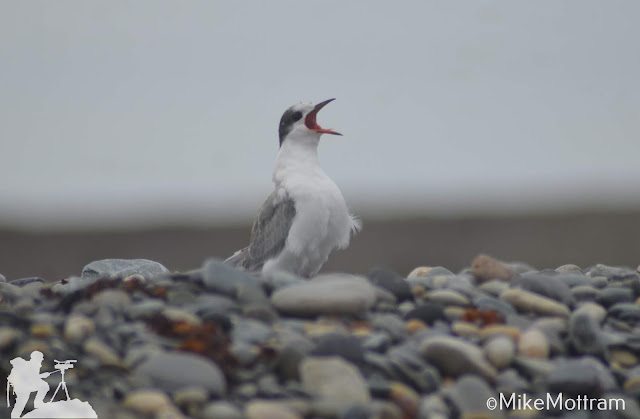 Not sure what its brought in? 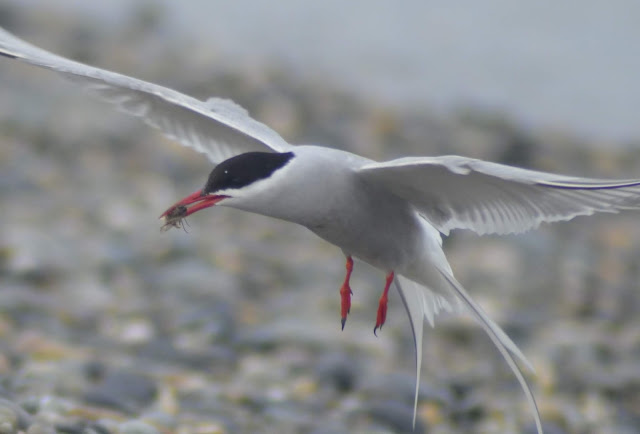 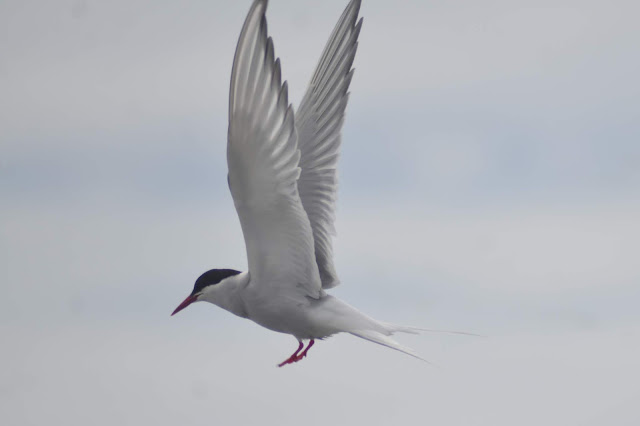 Preening on the beach and a well earned rest 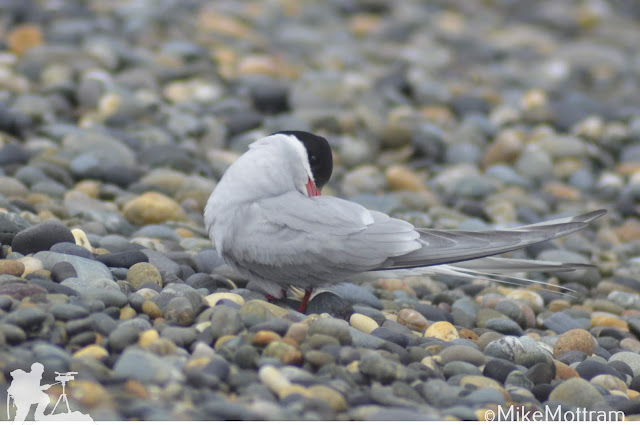 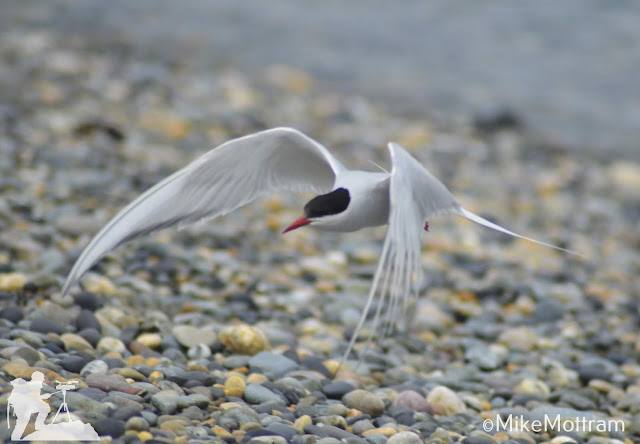 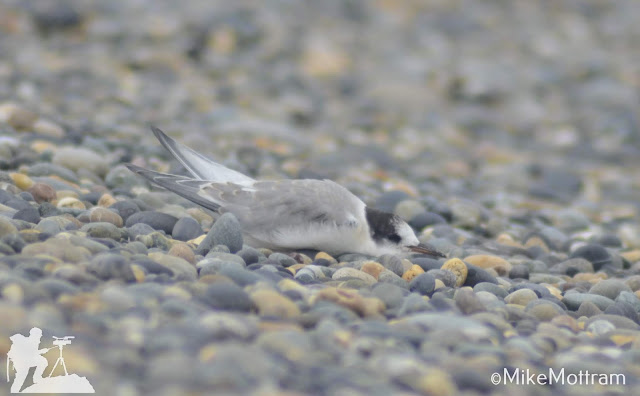 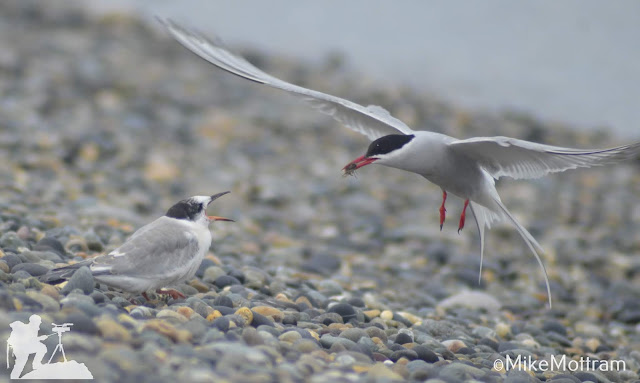 Adult and chick resting together 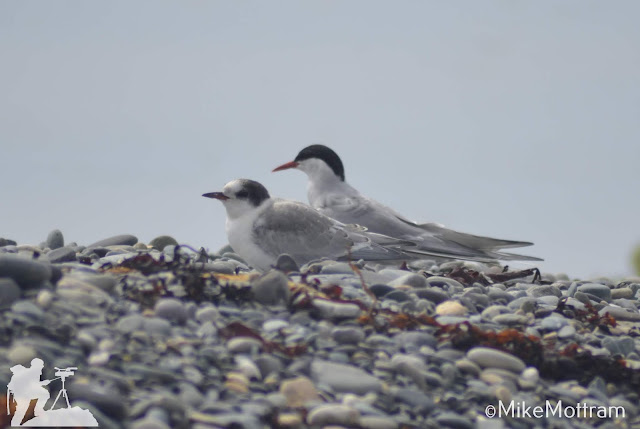 It was lovely arriving and seeing the adult's meters away landing on the posts of the colonies boundary fence. 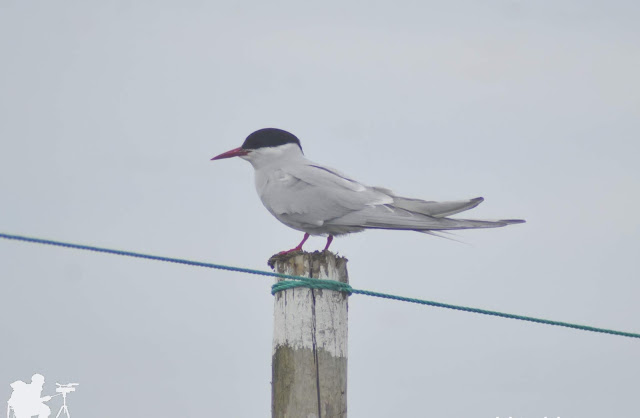 There is a small Fulmar colony near Almwch and its one of the best places I have ever seen with some quality views of the noisy pairs nesting but I did not see any eggs or chicks but I'm sure they will be there sometime soon. 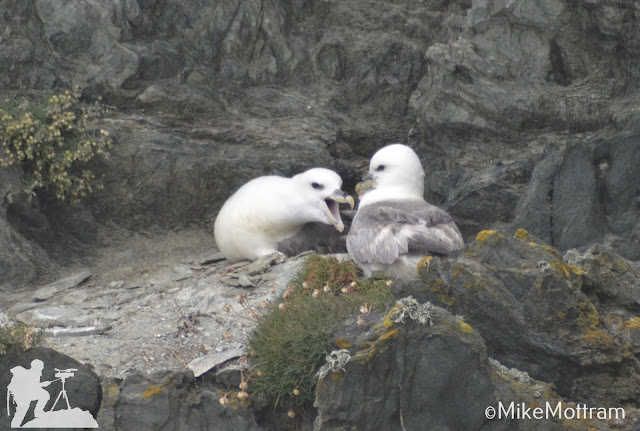 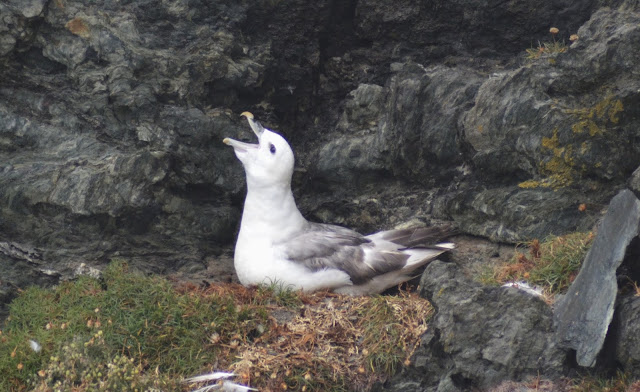 After leaving the Terns and having a rest on our walk back to Cemelyn bay and going onto the coastal path towards Almwch we decided to sleep just off the coastal path as the weather given was a clear night. We refreshed in some sea pools refresh by the tide before heading onto some stunning beaches and cliffs. We stopped with a view of Middlemouse an unpopulated rock covered in nesting birds Razorbills, Guillemots and recently this year a small colony of Gannets were reported by some kayaker but I have no seen any photographs hopefully I wish to rent a boat to take us past there to get some cool views of a brand new colony on this stretch of coastline. 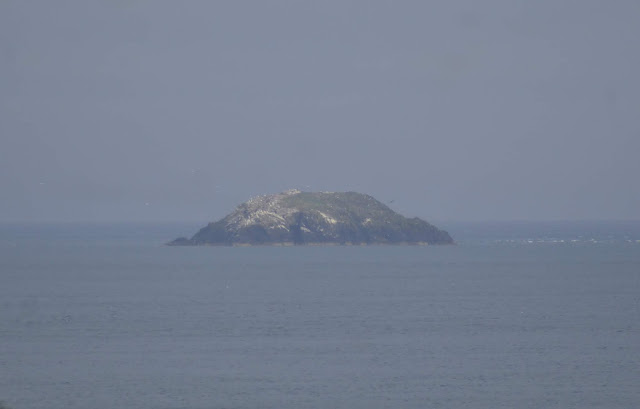 We slept well again and even heard calls of Manx shearwaters under the moonlit sky we which was a nice to hear when my sleep was disturbed sliding down the hills in the night. The next day we decided to do some sea watching and get some rest and nourishment while the high tide came in and brought in some Porpoises and Gannets 50m offshore. 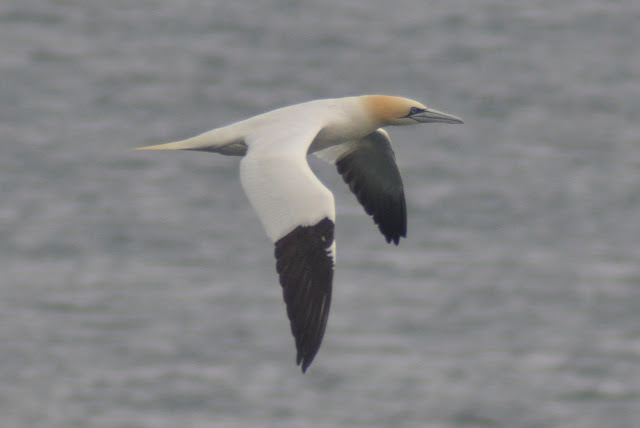 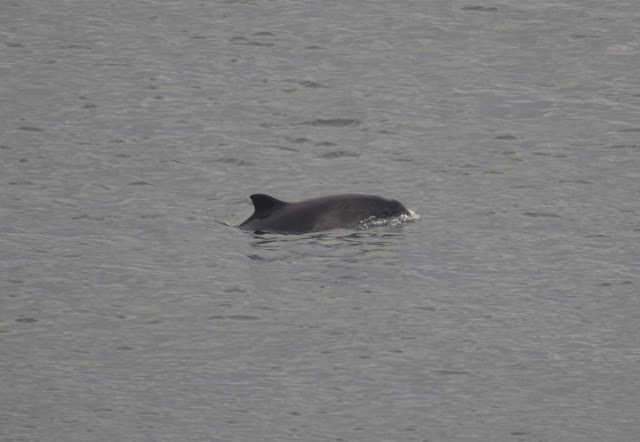 Over the whole week from Saturday Lunchtime to Thursday evening, we walked about miles and I even had the energy to do 20 miles around the peak district the following day to the Three Shires head where I found a few pairs of Dippers and saw a female Redstart plus some beautiful views. 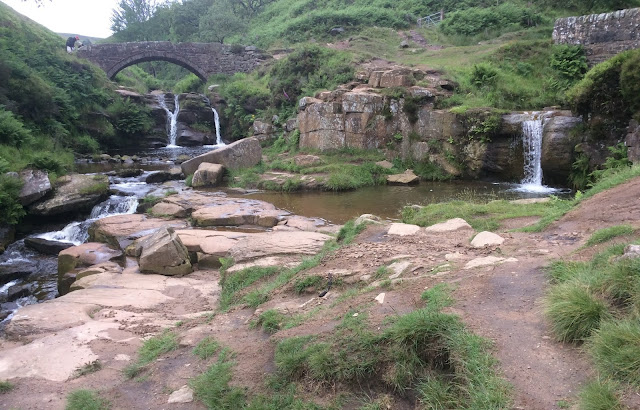 I have some local projects including exploring nonnavigational rivers in my kayak and camera trapping some locations. Hopefully, some weekend trips away to enjoy the last couple of months of summer before the cooler evenings commence.

Thanks for visiting and enjoy the rest of summer