Deer death a few miles from my local patch

Just seen this and it happened near where I took my Deer photographs and I think they blamed the Deer for there own stupidity and by the looks of the car it really hit at speed and most deers we saw were easily seen and avoided by most cars passing by but I guess all the circumstances are not known so it's hard to judge who's fault it was. 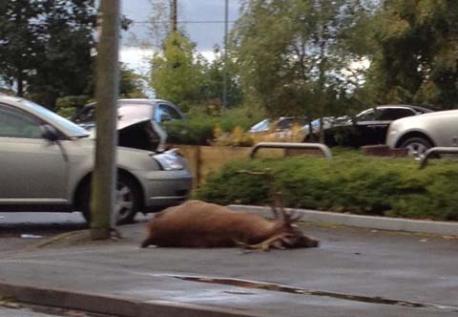 The stag lies at the side of the road.
Picture courtesy of Steve Sach
From the article
A DRIVER was treated for shock after a stag jumped in front of his car as he was driving along Manchester Road on Tuesday morning.
The driver, in a silver Toyota Avensis, was driving near the Rolls Royce garage at 6.38am when the animal jumped out in front of the vehicle.
Damage was caused to the car and the stag died at the scene.
The driver was treated for shock by ambulance crews, but did not need to be taken to hospital.
A spokesman for Tatton Park told the police that the deer was feral and did not belong to them after they had counted and checked their herd.


It's very sad but add's to my theory that there are wild deer in the area and they are coming closer to my local patch but alot more time needs to be spent on tracking and finding quieter areas where they could possibly be resting up along the Trent and Mersey canal.