Swan rescue and a sweet reunion :-)

After work we decided on heading out for an afternoon walk on my local patch with my camera and while walking by the river we noticed 2 cygnets alone on the river. We could not see the other 6 cygnets or Flash and Snow so we headed off to see if the rest of the family were any where on the canal or further upriver.
We found the rest of the family on the canal so I'm guessing the 2 on the river got left behind in the fast water or could not get up the high banks.
As I have been filming and photographing Flash for a few years and he has given me so many great photographs and allowed me into his world so I decided to pay him back and try to reunite the family. We returned to the 2 on the river to try and push them into shallower water to try and catch them to return them to the canal but they were very alert and we struggled to get them. I decided to go home to get my net and kayak and when we arrived back at the river the pair were asleep on a shallow bank right on the rivers edge.
I jumped into the river and crept up to them as I got closer they woke up so I netted them quickly so they would be caught together rather than be separated. As the adults don't go on the river more than once every few weeks so there would have been no chance of them reuniting so if I had not intervened either predation or flooding would have finished the pair so I felt I had to save them and reunite the pair with there family.
A few Photographs while waiting for the family to come to the pair
Flash comes to collect his missing cygnets from us on the canal 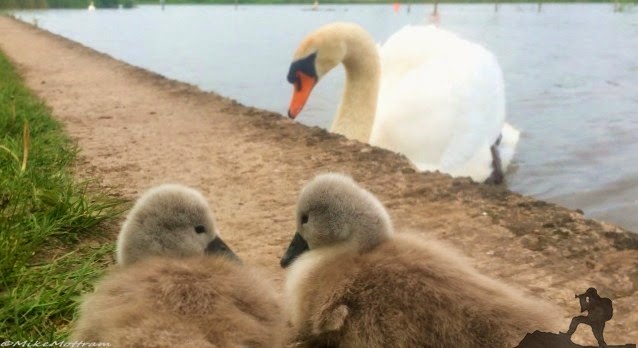 I have a video of the family reunited and as you'll see the Cygnets were happy to see there mum and siblings due to all there cheeping:
Happy to see them all safe this weekend having a feed at sunset :-) 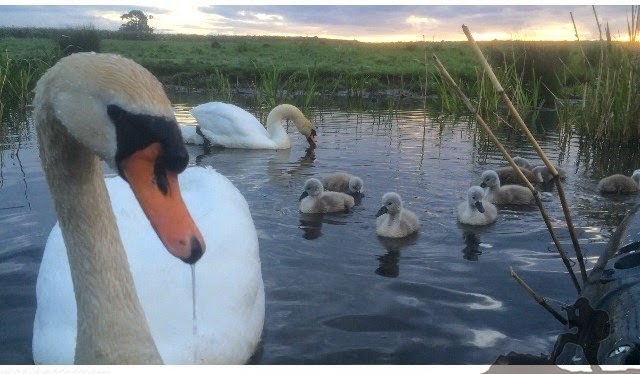